In order to optimally size the amount of RAM to allocate to a set of new machines for running MTR, I ran a few tests to check the memory usage of an MTR run for mysql-trunk and cluster-7.1. As using a RAM disk considerably speeds things up, I set the vardir to be on /ramdisk and logged the usage of that too.

The tests were performed on an 8-core E5450 @ 3.00GHz with 24GB RAM, with 8GB allocated to /ramdisk. Each branch ran the default.daily collection, which generally contains the most testing we do per-run. Between each run I rebooted the machine to clear the buffer cache and /ramdisk.

I used something like the script below, which saved the per-second usage of /ramdisk, the total RAM used, and the RAM used minus buffers.

First I graphed a straight run of the two branches, using the following gnuplot script:

I then performed a valgrind run on mysql-trunk using similar scripts. As valgrind takes considerably longer (and uses more RAM) I kept it separate as the combined graph isn’t very clear: 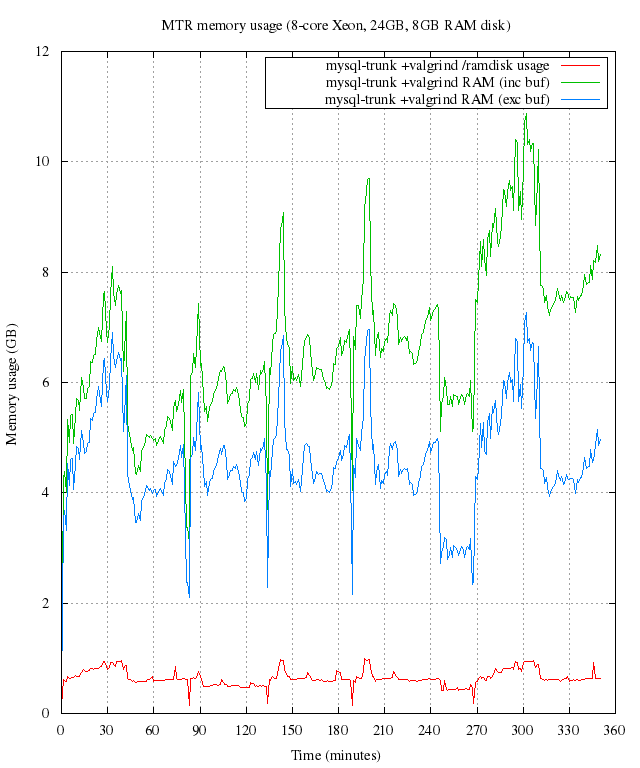 So, based on these results, the host machine (16GB RAM + 8GB RAM disk) is probably a sensible guide for now, and allows for some future growth.